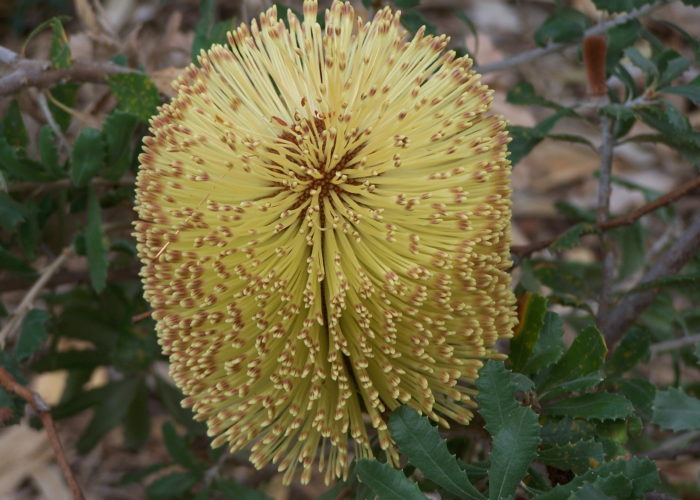 Banksia is a genus of about 100 species in the family Proteaceae, native to the Southern Hemisphere. Most are shrubs, but some are robust trees, with diverse foliage and large, complex flower heads.
Banksias are known for their distinctive, often large cone-shaped flower spikes. The flower head is made up of hundreds or even thousands of small individual flowers attached to a central axis. The flowers are often honey-scented and nectar-rich. There is no doubt that Banksias are valued as an important food source for a number of animals. They are highly attractive to pollinators and the birds absolutely adore them!

Banksia is named after the famous English naturalist and explorer, Sir Joseph Banks (1743-1820), who collected and described these plants on his voyage to Australia with captain James Cook.

It was also named “Australian Honeysuckle” because of its nectar, often referred to as “honey”. Banksia flowers are nectar-rich honey plants highly attractive to pollinators.

Banksia is an Australian native plant. Fossils indicate that these plants have been in Australia for at least 50 million years. The greatest concentration of species is found in southwest Australia.
Banksias are among the first species collected during Cook’s 1770 journey to Australia. However, Aboriginals use Banksias as a source of food well before the 18th century. They would often soak the flowers in water to make a honey drink.

These plants are naturally adapted to bushfires.
Most of the species have lignotuber, a woody structure at the base of the stem which stores nutrients which ensure quick regeneration of plants after the fire. The lignotuber would have enough food and water stored for the plant to regenerate after fire.

Banksias are used for ornamental purposes in woodturning, as they are large and solid enough to be used for woodturning applications. Woodturning is the process of creating wooden objects on a lathe, a unique form of woodworking.

They are great cut flowers because of their long vase life and flower form.

These plants will grow in most soil types if given good drainage. However, they will perform best in sandy soils with a pH between 5.5 and 7.0.