Kalmia is a genus composed of about 10 species in the family Ericaceae, which are found in North America.
These evergreen shrubs produce attractive leathery leaves and clusters of showy, beautiful bowl-shaped flowers. Kalmias are well-known ornamentals and popular garden plants.

The name “Spoonwood” has also been used for this plant. It is believed the roots Kalmia were used to make spoons.

Kalmia is a symbol of perseverance.

It can also be offered as a sign of treachery.

The plant can be harmful or even deadly to animals if ingested.
Kalmia angustifolia is also known as “Sheep’s Laurel” or “Lambkill”, because it’s poisonous to sheep.
Kalmia latifolia is also poisonous to several different animals and even humans. It irritates skin, eyes and causes an upset stomach and vomiting in people.

The flowers are usually pink, purple, lavender or white. 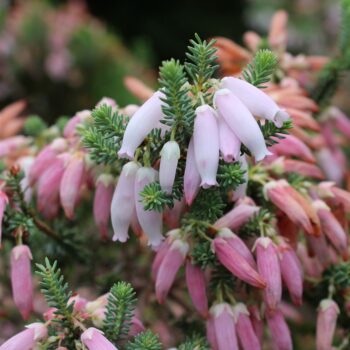