Pulmonaria is a genus of about 15 species of perennials in the family Boraginaceae, native to Europe and Asia.
These shade-loving plants produce hairy leaves in varying shades of green and small funnel-shaped flowers in a variety of colors. They bloom in late winter or early spring, bringing a bright spot of color to our gardens.

The genus name was derived from the Latin “pulmo”, which means “lung”, because the spotted leaves of Pulmonaria were thought to resemble diseased lungs.

In a language of flowers, Pulmonaria means “You Are My Life”.

In history, Pulmonaria was used as a medicine to treat coughs, chest congestion and other pulmonary ailments.
Medieval herbalists believed that when a plant resembles a particular body part, it must have the medicinal properties to cure that part of the body. The name “Pulmonaria” comes from the appearance of the foliage, resembling a diseased lung. The spotted leaves resemble a diseased lung, so logically it was thought the plant must be for lung problems. It is, however, well established today that there is no valid basis for that assumption. In fact, the plant has antioxidant properties and it is useful in the treatment of asthma and chronic coughs.

The flowers come in shades of blue, purple, pink and white.

Pulmonaria likes moist and well drained soil. Most of the species thrive best in soil with a pH in the 7.0 to 7.5 range. 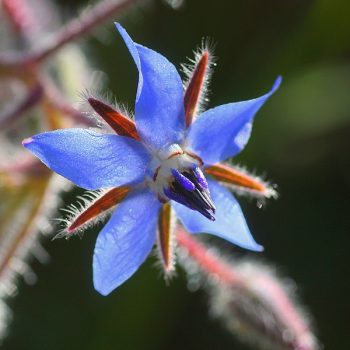 Myosotis Forget Me Not; Scorpion Grass