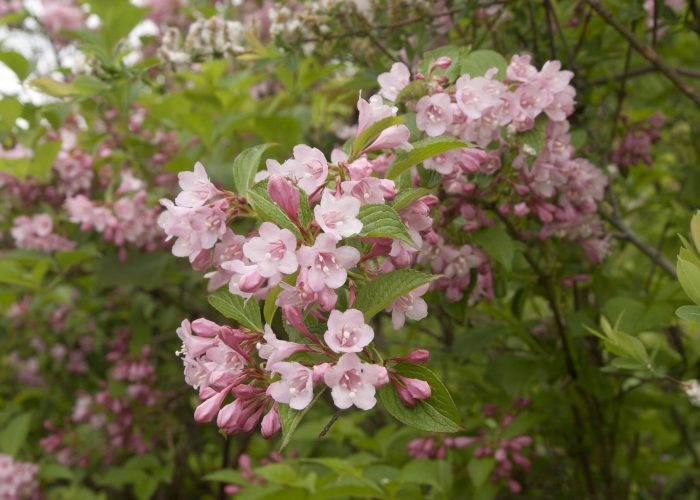 Weigela is a genus of about 10 species of flowering shrubs in the family Caprifoliaceae, native to open woodlands of eastern Asia.
These species have attractive foliage and tubular or trumpet-shaped flowers that bloom in late spring and early summer, but also sporadically throughout the year. They are perfect for anyone who wishes to grow long blooming, flowering shrubs. They bring charm to any garden and never fail to catch the eye of passers-by!

The genus name was given in honor of German botanist Christian Ehrenfried von Weigel (1748-1831).

These plants are faithful to their habitat and their relationships with pollinators. They bloom with grace and bring charm to any garden.

Weigela florida is one of the most popular species of the genus Weigela. It is a deciduous shrub with narrow green leaves and clusters of funnel-shaped pink flowers.
It was the first species to be introduced and was widely cultivated in the 19th century. The species is not, as its name would lead one to believe, native to Florida. It is actually native to eastern Asian countries, such as North China, Korea and Japan. The specific name is derived from the Latin adjective “floridus”, which means “blooming” or “flowery”, in reference to the large number of flowers that the plant bears.

The flowers come in shades of red, pink, white and yellow.

Weigela prefers fertile and moist, but well-drained soil. It can tolerate soil pH levels between 5.5 and 7.5.