Home » Interesting facts » How Did the Poinsettia Become Associated with Christmas

How Did the Poinsettia Become Associated with Christmas Christmas time is here and the magic of the season is all around us! It’s cold outside and warm in our souls. As long as we’re with our closest friends and family, we’re satisfied and happy. We want to make sure that our family, friends and loved ones are happy, too. When it comes to happiness, it’s just as good to give flowers as it is to receive them. And when we talk about flowers during Christmas time, we are most likely liable to think about Poinsettias first. Poinsettia has its roots in Mexico with its history tracing back to the ancient Aztecs, but it became widely popular when introduced to the United States. Today, Poinsettias are an indispensable part of Christmas decor throughout the world. They are symbols of good cheer and they just scream Christmas time!

Poinsettia is a shrub or small tree, typically reaching a height of 60 cm to 5 metres (2 to 16 ft). The plant has dark green leaves and yellow flowers surrounded with large, colorful bracts which look like petals. Often mistaken for flower petals, its colourful bracts are actually modified leaves that surround a bunch of small, inconspicuous yellow flowers called cyathia. These bracts change color in response to the plant forming flowers. They range from creamy white to pink to the traditional bright red.

Poinsettias are popular garden plants in tropical and subtropical areas and are well-known potted plants associated with winter festivities in temperate regions. They are the world’s most economically important potted plants and a popular choice as a decor and gift during Christmas time.

And contrary to popular belief, Poinsettias are not poisonous. There is a myth that Poinsettias are a highly toxic plant and the core of the myth dates back to 1919 when a child in Hawaii was thought to have died after eating a single Poinsettia leaf. However, the story turned out to be completely unsubstantiated. The truth is that Poinsettias have low toxicity. The American Medical Association’s Handbook of Poisonous and Injurious Plants lists nothing more than occasional vomiting as a side effect of ingesting. Poinsettias are not harmful to humans or animals, but they should not be eaten. Just because it’s not harmful doesn’t mean it’s safe to eat. How Did the Poinsettia Get its Name?

Poinsettia was named after the United States ambassador to Mexico Joel Roberts Poinsett (1779-1851), who played a crucial role in making the Poinsettia into the most popular Christmas plant.

Joel Roberts Poinsett was born in 1779 in Charleston, South Carolina, USA. He was a botanist, physician, diplomat and statesman. Poinsett served South Carolina in the state legislature and as Chairman of the Board of Public Works. He also represented South Carolina in Congress and was Secretary of War. In 1825, President James Monroe appointed Poinsett the first U.S. ambassador to Mexico. During his ambassadorial time in Mexico, he saw the plant in its native habitat and sent several specimens back to the United States. By 1836, the plant was widely known as the Poinsettia in English-speaking countries. As the plant gained in popularity in the United States, horticulturalist William Prescott honored the ambassador who brought it here with its common name – Poinsettia. Despite his successful career as a politician and ambassador, Poinsett will always be remembered for introducing the Poinsettia into the United States. He would be amazed at what started as simple cuttings from Mexico have become.

In July of 2002, the House of Representatives created National Poinsettia Day in honor of Joel Roberts Poinsett. Poinsettia Day also honors another American, Californian Paul Ecke Junior, who is considered the father of the commercial North American Poinsettia industry. Paul Ecke Junior developed the grafting technique causing seedlings to branch, allowing the Poinsettia industry to flourish. At the start of the 20th century, his father Paul Ecke Senior developed the first Poinsettia that could be successfully grown as an indoor potted plant and Poinsettia began to be widely popular. Each year on the 12th day of December, people across the United States recognize Poinsettia Day. Poinsettias contribute about $200 million annually to the United States economy in wholesale sales alone. It is also estimated that 35 million Poinsettias are sold in the United States each year.
Coincidentally, December 12 is also The Day of the Virgin of Guadalupe (Dia de la Virgen de Guadalupe), one of Mexico’s most popular Catholic festivals that celebrates the belief that a man encountered the Virgin Mary, Mexico’s patron saint, in Mexico City on that day in 1531. On that day, Poinsettias are displayed in celebration of the Virgin Mary, otherwise known as the Virgin of Guadalupe. It is not coincidence that Mexican people admire this plant. The reason of this admiration is easy to understand if we look at the origins of the plant.

What Are the Origins of the Christmas Plant?

Poinsettias are native to Central America and Mexico, especially an area of southern Mexico known as “Taxco del Alarcon” and further south where they flower naturally during the winter. In Mexico, Poinsettias are very common, often growing on the side of paths or roads.

They were popular and important plants to the Aztec people in the 14th to 16th century. The Aztecs called them “Cuetlaxochitl”, which means “flower that grows in residues or soil”. The blood-red bracts were a symbol of sacrifices and creation. However, Cuetlaxochitl was more than just a symbol for Aztecs. They had a number of practical uses for the plant, from dying clothes to using the sap as medicine, as well as for decoration. They used the plant as part of their mid-winter celebrations and planted it widely long before Europeans discovered North America. Montezuma, a 15th century Aztec king, adorned his palace with Poinsettia, having his people cultivate the flower as a gift from the Gods. The plant is still commonly used for decorative purposes in Mexico. Today, the plant is known in Mexico as “La Flor de la Nochebuena”, which means “Flower of the Holy Night” because it blooms during the Christmas season. In Chile and Peru, the plant is called the “Crown of the Andes”. How Did the Poinsettia Become the Christmas Flower?

Poinsettia is also known as “Christmas Star” or “Christmas Flower” because of the colorful star-shaped bracts that are always around during Christmas time. How the Poinsettia became known as Christmas symbol?

The use of the plant in celebrating Christmas actually dates all the way back to the 17th century, when Franciscan monks in Mexico began using it at the Christmas ceremony. They were the first to begin using Poinsettias at the holidays during their Nativity ceremonies.

At that time, the legend of the little Pepita was born, forever mixing the red and green colors to Christmas folklore in a story in which Poinsettias and Christmas come together. According to legend, a young Mexican girl named Pepita lived in a small village in a poor house. It was a Christmas time and everything was so beautiful. She was preparing to visit the Nativity scene at the chapel. It was a custom in many villages to honor the Christ child by bringing gifts for him to the church. Unfortunately, she had no gift to present to the Christ child during the Christmas Eve, so she gathered a bundle of roadside weeds and formed a bouquet. She felt embarrassed that she didn’t have more to offer to Jesus and sadness filled her heart. As she walked through the chapel to the altar, she remembered the kind words spoken to her by her cousin: “Even the most humble gift, if given in love, will be acceptable in his eyes. ” Immediately after, she felt her spirit lift as she knelt to lay the bouquet at the foot of the nativity scene. Forgetting the humbleness of her gift, the girl laid the weeds at the feet of the Christ child. Suddenly, the bouquet of weeds burst into brilliant red blooms! From that day on, the bright red flowers were known as the “Flores de Noche Buena” or “Flowers of the Holy Night”.
Although the legend’s truth can not be established, it is certainly a beautiful metaphor for the meaning of Christmas. This story reminds us that that any gift is beautiful when given with love and even the smallest gift would be appreciated if given with an open heart!

Poinsettia wasn’t unknown during this time, but it was used as a Christmas flower only in Mexico. It remained in relative obscurity until Joel Roberts Poinsett introduced it to the United States. This introduction forever changed the way we think about Poinsettias, not only in United States, but all over the world. Today, Poinsettia is the most popular Christmas plant and is grown globally for Christmas celebrations.

It won’t be long until Christmas day is here. Christmas can be the most exciting time of the year, but finding the perfect gift is a challenge that everyone faces at some point. Poinsettias make a great gift when visiting family for the holidays. They make even more sense as a gift for those who live far away, especially during this challenging time of COVID-19. Their bright colors make them perfectly festive for this time of year. These graceful flowers will add charm and beauty to your Christmas decorations and will also bring holiday cheer into your hearts and your homes!

When selecting a Poinsettia for yourself or as a gift, make sure it has healthy, dark green foliage, well-colored bracts, stiff stems and that no roots are coming out of the pot. It’s normal for the plant to have a few yellow leaves, but too many yellow leaves on the plant could mean it has been stressed. The plant should be full and bushy, and you should not be able to see through the stems and leaves. To ensure the plant thrives and grows to be a healthy and beautiful, choose one where the yellow flower buds are still closed. How to Care for Poinsettias?

Poinsettias prefer cooler temperatures overnight and slightly humid air. These plants will survive as an indoor plant in temperatures between 20-25 degrees Celcius (68-77 degrees Fahrenheit), and they should be kept away from any cold or warm drafts such as drafty windows, air conditioners, radiators and heaters. If possible, move the plant to a cooler room at night. Make sure the Poinsettias get a specific amount of light. Place them in an area where they’ll receive a minimum of six hours of bright sunlight each day. Your plant will last longer if it’s in bright, natural light. However, you should avoid direct sunlight since it will dry out more quickly. Keep it indoor when the sun is harsh and don’t over water it.

When it comes to watering Poinsettias, you have to find the balance between not too wet and not too dry. The plant will need enough water to keep the potting soil damp but not sodden. You may be able to tell when watering is needed by lifting the entire pot. When the pot seems light, it indicates that the soil is dry and you need to water the plant. If the soil always feels cold and wet, it means the roots are stressed from over watering. When you water, remove any decorative foil on your plant that impede water drainage. If the pot has a saucer beneath it, make sure to empty it after each watering. And remember, the smaller pots need watering more often than big ones because they dry out faster. Once selected, Poinsettias require little care. So don’t worry, enjoy your Poinsettias and enjoy the holidays! 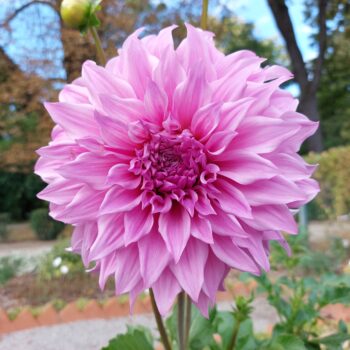