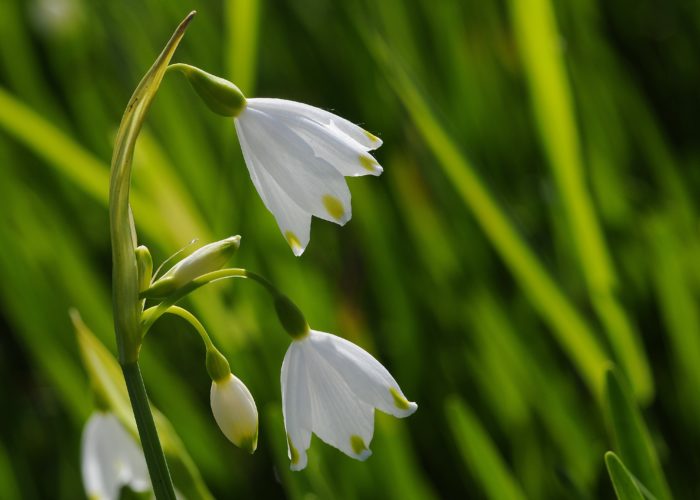 Leucojum is a genus of only two species in the family Amaryllidaceae, both native to Eurasia.
Leucojum vernum (Spring Snowflake) blooms in early spring, while Leucojum aestivum (Summer Snowflake) blooms in late spring and early summer. These bulbous perennials have grass-like foliage and pendulous, white and bell-shaped flowers, which are marked on all six petal tips with green or yellow-green marks. They are small, but very pretty and fragrant!

The genus name is derived from the Greek words "leukos", meaning "white" and "ion", which means "violet", referring to the color and possibly fragrance of the flowers.

The common name "Snowflakes" refers to the white flowers of this plant. Though its name suggests otherwise, Snowflakes bloom in spring and summer.

Leucojum is most closely related to the genera Galanthus and Acis.
The genus Acis was lumped into Leucojum for more than a century, only to be returned to genus status in 2004. Leucojum and Acis, both commonly known as Snowflakes, are very similar in appearance with some differences. The Acis species prefer drier soils than Leucojum species. They have flowers without markings, narrow leaves and solid scapes, while Leucojum has white flowers with green or yellow marks, wider leaves and hollow scapes. Leucojum species are distributed widely across Europe, while Acis species are restricted to a small area of the Mediterranean.
Leucojum and Galanthus are similar too, but there are also some differences. The six tepals (petals and sepals that are similar) of Leucojum flowers are all of equal length, and all have green tips, while Galanthus has three inner tepals that are shorter and broader than the three outer tepals.

These plants are not fussy about soil type, but they bloom best in a soil that's rich, moist and well-drained.