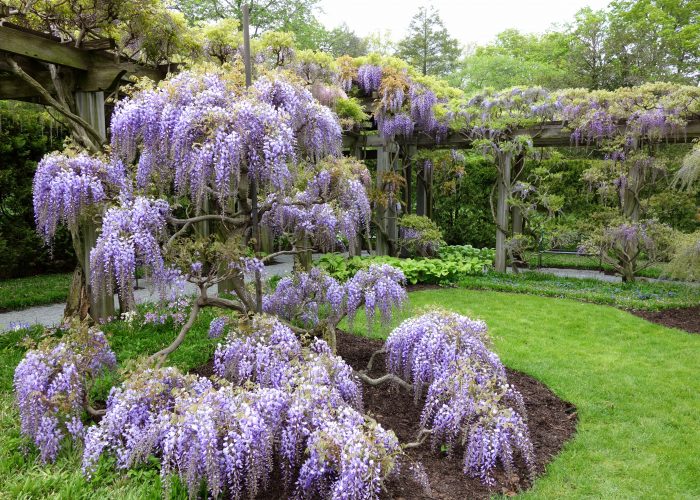 Wisteria is a genus of fast-growing, deciduous climbers. It contains about 10 species of woody climbing vines in the family Fabaceae, native to East Asia and the USA.
They are ideal for training into trees, covering walls and other garden structures or as a freestanding half standard. Wisterias require high maintenance and usually begin flowering within three to five years of planting.

Thomas Nuttall, an English botanist, named this genus in honor of Dr. Caspar Wistar (1761 – 1818), who was an American physician and anatomist.

It can also symbolize longevity and immortality.

The world’s largest wisteria vine is in Sierra Madre, California, USA, originally planted in 1894.
In 1990 it was certified as the largest blossoming plant in the world, and is considered one of the seven horticultural wonders of the world. The vine now takes up more than one acre of land and weighs approximately 250 tons.

Wisteria can live up to 100 years or even more.
More surprisingly, there is a 1200 year old Wisteria tree in Japan, in Ushijima Wisteria Garden of Kasukabe City.

Wisterias are powerful and strong growers that can weaken structural supports and have a tendency to overtake other plants.
Japanese Wisteria (Wisteria floribunda) and Chinese wisteria (Wisteria sinensis) are the most invasive species.

How Long Does It Take to Bloom?

Most Wisteria species take three to five years to start blooming, but some species need more than 10 years to bloom. Wisterias planted from seed can take more than 15 years to bloom or might never bloom at all.
Proper care and maintenance can accelerate the blooming process.

Wisteria comes in shades of white, blue, purple and pink.