Nerium is a genus of one species – Nerium oleander that is native to Europe and Asia. The plant belongs to the family Apocynaceae (the dogbane family), one of the largest plant families.
Oleander is an evergreen ornamental shrub or small tree with long, narrow, dark green leaves and brightly colored, five-petaled flowers. The flowers are either single or double and are often gathered in clusters. Oleander is a great garden plant because it is a long-term survivor and grows in a wide array of conditions. It is often planted for decorative purposes and many cultivars are widely available.

The genus name comes from the Greek word “nerion”, which means “water” or “wet”, because the plant grows abundantly in wet places along streams and on riverbanks.

The name oleander is derived from its resemblance to Olive Tree (Olea Europaea). The leaves of both plants are very similar.

Oleander symbolizes desire and destiny, but it can also mean caution.

It is also associated with romance, charm and everlasting love.

Some believe that Oleander should not be kept in the bedroom because it brings misfortune and disease into the family.

According to Greek mythology, a young man named Leander fell deeply in love with Lady Love. He swam the Hellespont every night to see his beloved. The Hellespont is a narrow strait in northwestern Turkey, called in modern times the Dardanelles, that connects the Aegean Sea and the Sea of Marmara. Unfortunately, one night he was drowned in his attempt and the crashing waves threw his body against sharp rocks. His lover found him as she walked the shores calling “Oh Leander, Oh Leander.” Finally, she found the beautiful flower clutched in his hand. She took the flower and kept it as a symbol of their everlasting love. She planted it and called it – Oleander.

Nerium oleander is widely cultivated across various parts of the world. Many cultivars are available in a wide range of colors, sizes and blooming times throughout the season.
For example, “Calypso” has single, red flowers and is very hardy, “Sister Agnes” has single, pure white blooms, while “Isle of Capri” has single flowers that are light yellow in color. Another cultivar called “Hawaii” produces single and large pink flowers with yellow throats. It’s also worth to mention “Variegata” and “Variegatum Plenum” and their lovely variegated leaves. There are also interesting dwarf cultivars, such as “Petite Pink” or “Petite Salmon”. All of them are beautiful in their own way!

Oleander is an important flower in Christianity.
In the Bible, the plant is referred to as Rose. Most authorities agree that the “Rose of Jericho” refer to the Oleander which grows near water, especially in the Jordan Valley.

Oleander is one of the most poisonous plants in the world. It is toxic to humans as well as animals. Consuming even a small amount of any part of the plant is highly dangerous and can cause nausea, vomiting, stomach pain, blurred vision, headache, serious heart problems and death.
All parts of the plant are extremely toxic. Even the smoke from burning plant material can be toxic and even deadly. The plant is so toxic that it is used as a suicide plant in South Asia, particularly Sri Lanka.
If any amount of the plant is ingested, seek medical attention immediately! Be careful and always wear long sleeves and gloves when handling this plant.

Although it’s poisonous, Oleander has a long history of medicinal use and has a wide range of applications. Its use as a medicinal herb dates back at least 3500 years.
The plant has been used to treat hemorrhoids, ulcers, eye diseases and skin problems. It has also been used to treat epilepsy, tumors and cancer.

The flowers come in shades of red, purple, pink, yellow, cream and white.

Oleander will grow in almost any soil and can tolerate drought and high salt content in soil. The ideal soil pH is between 6.5 and 7.5. 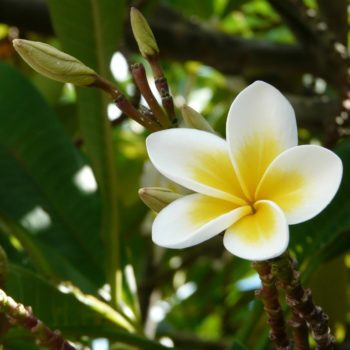