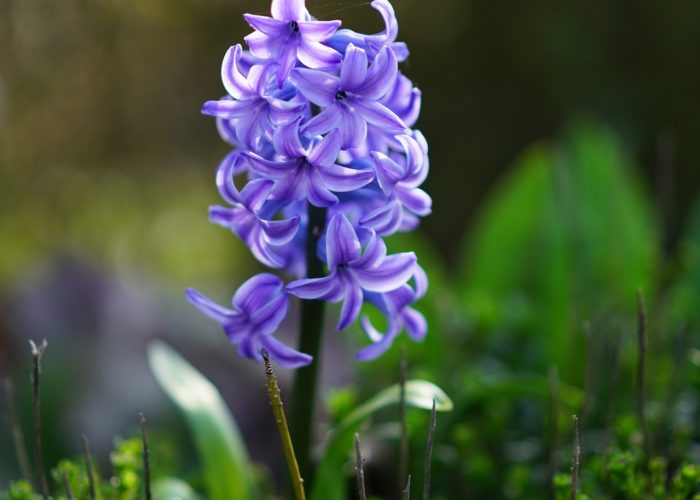 Hyacinthus is a small genus of three species of bulbous flowering plants in the Asparagaceae family, native to Mediterranean and Middle East.
The plant has narrow leaves that are folded lengthwise, and highly attractive and fragrant flowers which are borne in a raceme cluster at the top of the leafless stems. Hyacinthus, commonly known as Hyacinth, is extremely popular and praised because of its unique, rich and heavy scent. Hyacinths are great for gardens, as well as for bouquets and arrangements.

The genus was named after a famous Greek hero from Greek mythology – Hyacinth.

It can also represent spring, rebirth and family togetherness.

Purple Hyacinth is known as a symbol of sadness, sorrow and regret.

Celebrate World Hyacinth Day on March 7th by enjoying the beauty of this popular plant.

Hyacinth is considered toxic. It can be irritating to the skin and can cause various stomach problems if ingested, including stomach pain, discomfort and feeling bloated. It contains an oxalic acid in its bulb, a strong dicarboxylic acid which can, by the way, remove a rust.

Hyacinths are poisonous to animals as well as humans.

Benefits and Uses of Hyacinth

Because of its highly fragrance, Hyacinth is used in perfume industry.

The plant has medicinal value as well. It has been used to treat sore throat, diarhea, nausea, stomach disorders and snake bites. It also helps in controlling cholesterol level.

Hyacinth comes in many color varieties, such as purple, blue, white, yellow, red, pink and orange.

These plants will perform well in moist and well drained soil that is neutral to slightly acidic.