Xerochrysum is a genus of 8 species of flowering plants, native to Australia. The genus belongs to the family Asteraceae, with both annual and perennial varieties.
Xerochrysum produces showy, papery-like bracts in a variety of colors. Tiny, individual flowers are yellow in color and formed into a large cluster surrounded by beautiful bracts. Xerochrysum is attractive to bees, butterflies and birds. It is one of the most popular everlasting flowers, due to its enduring beauty and a wide color palette.

The genus name is derived from the Greek words “xeros”, which means “dry” and “chrysos”, meaning “gold”, in reference to the dry golden bracts, often mistakenly called petals.

Xerochrysum bracteatum, also known as Golden Everlasting or Strawflower, is a flowering plant native to Australia, where it grows freely in open grassland areas. It is an annual or perennial shrub generally reaching 30 to 90 cm (1 to 3 ft) in height. Strawflower is very easy to grow and is widely cultivated for its large and colorful bracts.

The common name “Strawflower” comes from the straw-like texture of the bracts. The bracts are rigid, but soft and dry, with a low water content.

Strawflower is one of the most popular everlasting dried flowers.
Everlasting flowers are flowers that retain their form, shape and color when dried, offering their beauty beyond the experience of one growing season, after the other flowers have faded and died.

It is also a very popular cut flower and looks great in any bouquet of flowers.

Xerochrysum species were formerly included in the genus Helichrysum, and later transferred to the genus Bracteantha.
Today they are eight plant species that belong to the genus Xerochrysum.

Its bracts are yellow, orange, purple, pink and red.

Xerochrysum prefers soil with a pH of 5.5 to 7.5,, but the plant grows in nearly any well-drained soil. 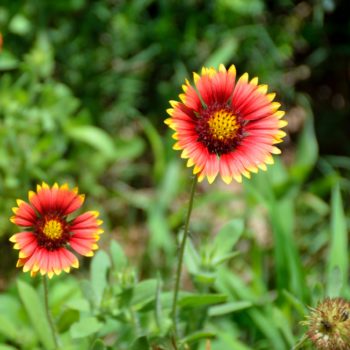